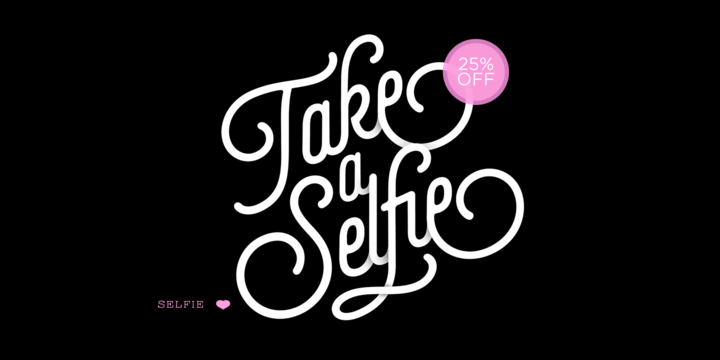 -But first, let me take a Selfie!- said that girl of the song and almost all of you at least once this year.

While some terms and actions get trendy, some font styles do it too. It wouldn’t be crazy to combine these worlds, in fact it happens often.

Selfie is a connected sans serif based in vintage signage scripts seen in Galerías of Buenos Aires. These places are, in general, very small shopping centres which pedestrians sometimes use as shortcuts to get to other parts of the city.

Their dark corridors take you back in time, and all of a sudden you are surrounded by cassettes, piercings, and old fashioned cloth. For some reason, all these shops use monolined geometric scripts. Surely, neon strings are easier to manipulate when letterforms have simple shapes.

My very first aim with Selfie was to make a font that would serve as a company to those self-shot pictures that have become so popular nowadays.

However, the font turned into something more interesting: I realised it had enough potential to stand-alone.

Selfie proves that geometry itself can be really attractive. In this font, elegance is not achieved with the already-known contrast between thicks and thins of calligraphy, but with the purity of form.

Its curves were based in perfectly shaped circles which made the font easy to be used at different angles (some posters show it at a 24.7º angle) without having problems/deformities.

In addition to its nice performance when used over photographies; the font can be a good option for packaging and wedding invitations.

Adding some lights/shadows between letters will for sure catch the eye of the viewer: Words will look as if they were made with tape/strings; so trendy nowadays.

Try using Selfie at a 24.7º angle so that the slanted strokes become perfectly vertical.

Having the decorative ligatures feature (dlig) activated is a good option to see letters dance.

It is absolutely recommended to use this font with the standard ligatures feature (liga) activated. It makes letters ligate perfectly and also improves the space between words.